The Largest Wooden Airplane Ever Built

During World War II, German submarines were sinking hundreds of Allied ships, and there was a growing need to move troops and materials across the Atlantic Ocean. Henry Kaiser conceived the idea of a massive flying transport and turned to Howard Hughes to design and build it. Hughes took on the task, made even more challenging by the government’s restrictions on materials critical to the war effort, such as steel and aluminum. Six times larger than any aircraft of its time, the Spruce Goose, also known as the Hughes Flying Boat, is made entirely of wood and flew just one time on November 2, 1947, in Long Beach, California. 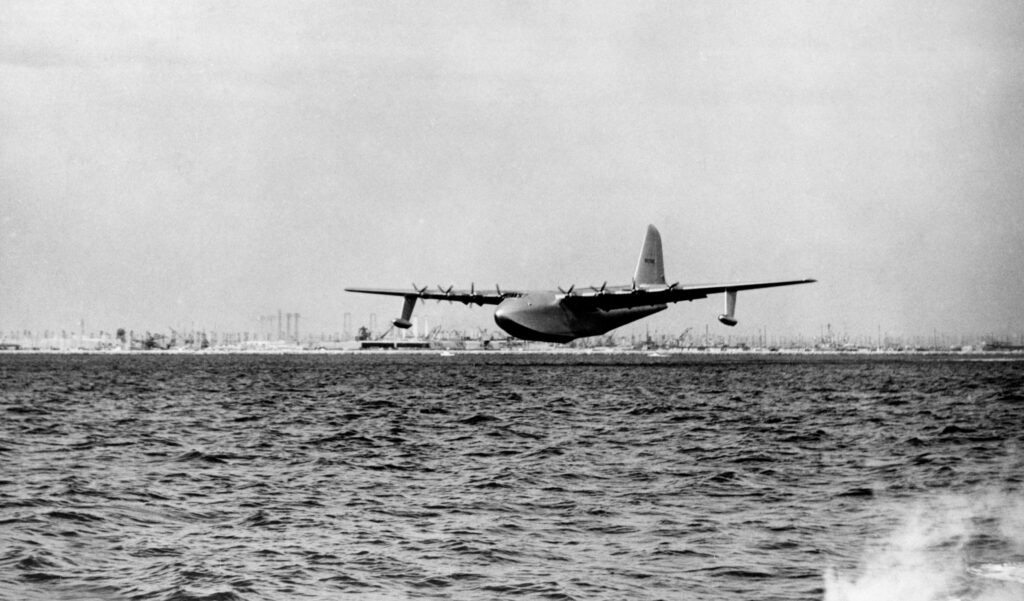 Watch the Spruce Goose’s journey from Long Beach, California, at its new home at the Evergreen Aviation & Space Museum.

History of The Spruce Goose

In 1942, Henry Kaiser, steel magnate, and shipbuilder brought the idea to build a massive flying boat to Hollywood director and aviation pioneer Howard Hughes. The two met at the Beverly Hills Hotel, where they mapped out and signed a contract for the design for the prototype. Originally designated HK-1 for the first aircraft built by Hughes-Kaiser, the giant was re-designated the H-4 Hercules when Henry Kaiser withdrew from the project in 1944 due to mounting frustration in construction delays. 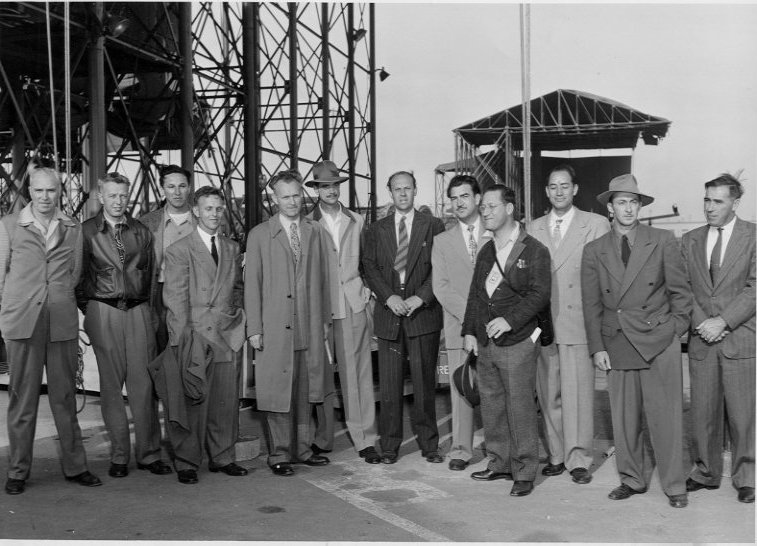 On a peaceful Sunday at Long Beach Harbor in California, thousands of onlookers gathered to watch The Hughes Flying Boat taxiing on the water for a test run. With Howard Hughes at the controls, David Grant as co-pilot, and several engineers, crew members, and journalists on board, Hughes made an unannounced decision to prove the aircraft could indeed fly. The H-4 Hercules prototype lifted off the water to fly just under half a mile at an altitude of 25 feet above the seas for about 30 seconds. Although the aircraft never saw air again, this one flight changed the course of global innovation and inspired a whole new generation of aviation enthusiasts.

The Spruce Goose on Display in California

After the historic flight, the Spruce Goose was kept out of the public eye for 33 years. Perhaps dreaming of a second flight, Hughes retained a complete crew to maintain the plane in a climate-controlled hangar until he died in 1976. After Hughes’ death, the Spruce Goose was gifted by Hughes’ Summa Corporation to the Aero Club of Southern California. The Aero Club then leased it to the Wrather Corporation, who moved the aircraft into a domed hangar next to the Queen Mary in Long Beach, California. The Spruce Goose was once again in the public eye for the first time in three decades.

In 1992, Evergreen Aviation & Space Museum co-founders Michael King Smith and Delford M. Smith submitted the winning proposal to provide the American icon with a proper home. The Flying Boat was disassembled and transported by barge up the West Coast, then up the Columbia and Willamette Rivers, to Portland, Oregon. It remained there for several months until water levels permitted the massive structures to safely pass under the Willamette’s many bridges. 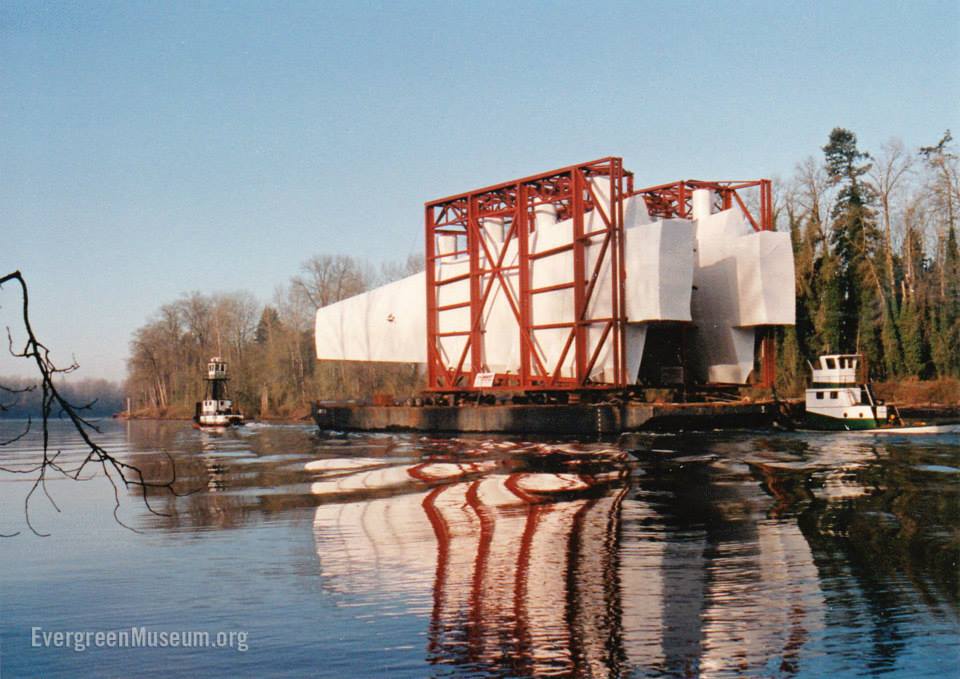 Finally, in February 1993, the aircraft was transported by truck for the last 7.5 miles to McMinnville, Oregon. Temporary hangars were built as housing for the Spruce Goose while volunteers worked on the aircraft’s restoration. 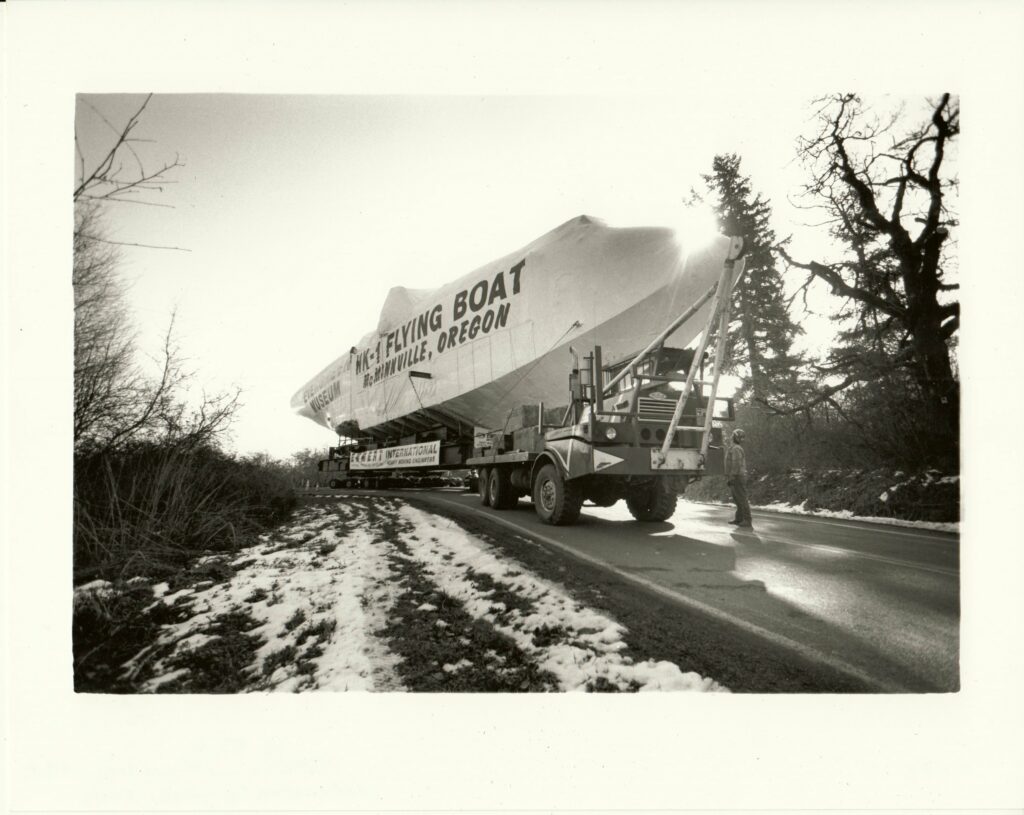 Grand Opening Of The Evergreen Museum

In 2001, the re-assembly of the Spruce Goose was completed, and the Evergreen Aviation & Space Museum opened its doors for the first time.

Over the remaining year, over 150,000 people came to see the Spruce Goose at its new home. 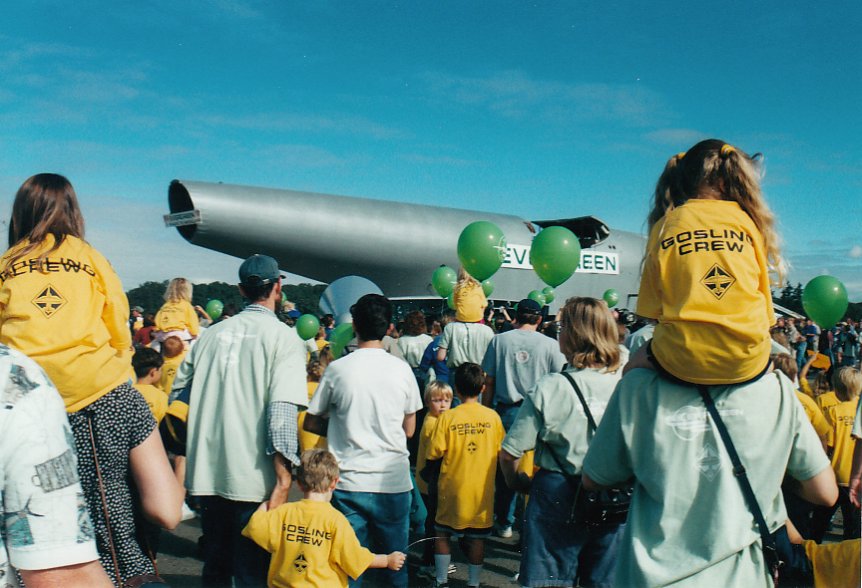 75th Anniversary of the Historic Flight

At Evergreen Aviation & Space Museum, we are celebrating the first and only flight of the Hughes Flying Boat with special monthly programming, limited-edition merchandise, and more. Details for the 75th anniversary coming soon.

On Sunday, November 2, 1947, the Hughes Flying Boat had its first and only flight on Long Beach Harbor, California. While taxiing on the water, Howard Hughes surprised the gathered crowd of onlookers by suddenly lifting the aircraft off the sea during a taxiing test. Spruce Goose was airborne for about 30 seconds, 25 feet above the harbor for just under half a mile.

Despite its name, almost the whole aircraft is made from birch, specifically Duramold, a wood lamination process that produces strong plywood. The only pieces on the Spruce Goose not made of wood are the engines, electronics, screws, and braces used in the Restoration process.

There was only one Spruce Goose ever built. This aircraft was a prototype, and there were plans to develop more. However, by the time the Spruce Goose flew in 1947, World War II was long over and there was no longer a need for the humongous aircraft.

At the time it cost $23 million. It today’s money that’s equivalent to more than $278 million.

When the Evergreen Museum founders won the Spruce Goose bid in 1992, it was transported from Long Beach, California, to Portland, Oregon. The aircraft was disassembled and transported by barge up the West Coast, then up the Columbia and Willamette Rivers, to Portland, Oregon. In February 1993, the pieces floated down the Willamette River and then by truck to their home in McMinnville, Oregon. Once the Evergreen Museum’s Aviation Museum building was completed in 2001, the pieces were brought inside and put back together by our Restoration team.

The aircraft is a high-wing, eight-engine, flying boat prototype built for military transport. The airframe is constructed primarily of Duramold, a birch-based wood lamination process with a silver-grey finish. On the outer third of both wings hangs a pontoon to balance the plane in the water. Each engine cowling contains a Pratt & Whitney R-4360 Wasp Major 28-cylinder air-cooled radial piston engine.

Want to see The Spruce Goose in person?