A new paper finds more radar signals suggesting the presence of subsurface ‘lakes,’ but many are in areas too cold for water to remain liquid.

In 2018, scientists working with data from ESA’s (the European Space Agency’s) Mars Express orbiter announced a surprising discovery: Signals from a radar instrument reflected off the Red Planet’s south pole appeared to reveal a liquid subsurface lake. Several more such reflections have been announced since then.

In a new paper published in the journal Geophysical Research Letters, two scientists at NASA’s Jet Propulsion Laboratory in Southern California describe finding dozens of similar radar reflections around the south pole after analyzing a broader set of Mars Express data. Still, many are in areas that should be too cold for water to remain liquid.

“We’re not certain whether these signals are liquid water or not, but they appear to be much more widespread than what the original paper found,” said Jeffrey Plaut of JPL, co-principal investigator of the orbiter’s MARSIS (Mars Advanced Radar for Subsurface and Ionospheric Sounding) instrument, which was built jointly by the Italian Space Agency and JPL. “Either liquid water is common beneath Mars’ south pole, or these signals are indicative of something else.”

The radar signals initially interpreted that liquid water was found in a region of Mars known as the South Polar Layered Deposits. It was named for the alternating layers of water ice, dry ice (frozen carbon dioxide), and dust that have settled there over millions of years. These layers are believed to provide a record of how the tilt in Mars’ axis has shifted over time, just as changes in Earth’s tilt have created ice ages and warmer periods throughout our planet’s history. When Mars had a lower axial tilt, snowfall and layers of dust accumulated in the region and eventually formed the thick layered ice sheet found there today.

Scientists can peer below these icy layers by beaming radio waves at the surface, mapping them in detail. Radio waves lose energy when they pass through material in the subsurface; as they reflect on the spacecraft, they usually have a weaker signal. But in some cases, signals returning from this region’s subsurface were brighter than those at the surface. Some scientists have interpreted these signals to imply the presence of liquid water, which strongly reflects radio waves.

Plaut and Aditya Khuller, a doctoral student at Arizona State University who worked on the paper while interning at JPL, aren’t sure what the signals indicate. The areas hypothesized to contain liquid water span about 6 to 12 miles (10 to 20 kilometers) in a relatively small region of the Martian south pole. Khuller and Plaut expanded the search for similar strong radio signals to 44,000 measurements spread across 15 years of MARSIS data over the entirety of the Martian south polar region. 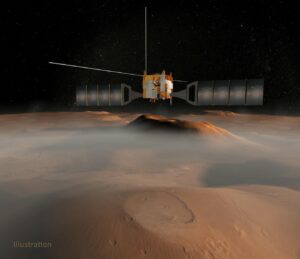 The analysis revealed dozens of additional bright radar reflections over a far greater range of area and depth than ever before. In some places, they were less than a mile from the surface. Temperatures are estimated to be minus 81 degrees Fahrenheit (minus 63 degrees Celsius) – so cold that water would be frozen, even if it contained salty minerals known as perchlorates, which can lower the freezing point of water.

Khuller noted a 2019 paper in which researchers calculated the heat needed to melt subsurface ice in this region, finding that only recent volcanism under the surface could explain the potential presence of liquid water under the south pole.

“They found that it would take double the estimated Martian geothermal heat flow to keep this water liquid,” Khuller said. “One possible way to get this amount of heat is through volcanism. However, we haven’t really seen any strong evidence for recent volcanism at the south pole, so it seems unlikely that volcanic activity would allow subsurface liquid water to be present throughout this region.”

What explains the bright reflections if they’re not liquid water? The authors can’t say for sure. But their paper does offer scientists a detailed map of the region that contains clues to the climate history of Mars, including the role of water in its various forms.

“Our mapping gets us a few steps closer to understanding both the extent and the cause of these puzzling radar reflections,” said Plaut.