The NASA team is moving parts of the Space Launch System rocket to begin assembly of the forward, or upper part, of the rocket’s core stage for the Artemis II Moon mission. On March 19, the intertank was moved to the vertical assembly area at NASA’s Michoud Assembly Facility in New Orleans, where the core stage is manufactured. The intertank flight hardware is part of the upper core stage that will help power Artemis II, the second flight of the deep-space rocket, and the first crewed lunar mission of NASA’s Artemis program. 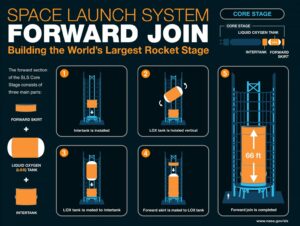 The intertank contains avionics that is the “brains” of the rocket. It also serves as one of the main attach points for the twin solid rocket boosters that work with the core stage to send SLS to space. The core stage will supply propellant and power to the four RS-25 engines at the bottom to produce the remaining 2 million pounds of thrust needed to send the Artemis II mission to orbit.

NASA is working on landing the first woman and the next man on the Moon. NASA’s backbone for deep space exploration is SLS and Orion, ground systems at Kennedy, the human landing system, and the Gateway in orbit around the Moon. SLS is the only rocket that can send Orion, astronauts, and supplies to the Moon in a single mission.